As we count the days to the public presentation of Sylva Nze Ifedigbo's 'The Funeral Did Not End,' we're happy to share with you an interview he granted Griots Lounge and culled from: http:/griotslounge.wordpress.com/2012/09/04/a-feeling-of-fulfilment-djeli-interviews-sylva-nze-ifedigbo/

Enjoy the read and look out for The Funeral Did Not End from the 15th of September! 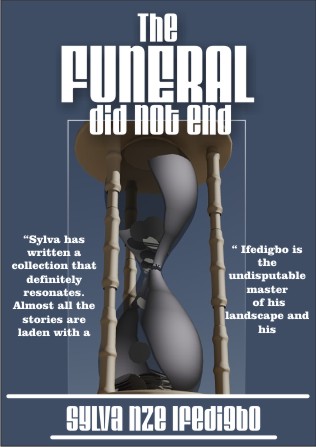 Patience is truly a virtue. Sometimes, we all need to wait to have the best of everything. A couple of days ago, a phrase became popular and trending on social media, Facebook and Twitter as well; “The Long Wait is Finally Over”. Everyone was talking about Sylva Nze Ifedigbo’s “The Funeral Did Not End”. This was because of how long literary worshipers had to wait for this work to be sent into the market. Two days ago, after a couple of years of announcing the much anticipated collection of short stories, Dada Books finally announced the release of TFDNE on Facebook. Djeli met with the humble, cheerful and talented author in an interview, to celebrate with him and get to know more about his thoughts about this release, which has been planned to take place on the 15th of September, 2012.

Trained as a Veterinary Doctor at University of Nigeria Nsukka, Sylva Nze Ifedigbo who now works in Coporate Communication, is an award winning fiction writer and essayist, he has written widely on Nigerian Socio-political issues both online and in the print media, with Next Newspaper and Daily Times having carried his by-line regularly. His novella- Whispering Aloud was published in 2008 by Spectrum Books Ibadan.

GL: Finally, “The Funeral Did Not End” is out on 15th September. How do you feel about this achievement?

NZE: Excited. I think that is one word that captures how I feel. For me like it is for every writer, having my book out is a significant personal achievement and an important milestone in my development as a writer. So I look forward to the date with joy and excitement.

GL: It looked like it took forever for it to come out. Your readers were becoming nostalgic about it. Did you ever feel the pressure?

NZE: Yeah, it really did seem like forever. This was one funeral that really refused to end (laughs.) You know at some point me and my publisher joke about having jinxed ourselves by selecting that title for the book when the initial delay became protracted. So yeah naturally I felt the pressure. So much of it I must say. Personally, it was like my writing was on a pause. You know, I am someone who always has very high expectations of himself and not having the book out when I planned it came with a feeling of disappointment. But more of the pressure came from the endless questions from friends and fans who wherever they encountered me, at readings, social gatherings or online never failed to ask when the book will be out.

GL: Why did it take such a long gestation period for TFDNE to be out?

NZE: As in all human endeavours, unforeseen events often spring up which hamper or halt the progress of a process. That is really what happened. As someone who believes in fate, I will like to simply say that there was a reason for the delay and that this time, is the right time for the book to be released.

GL: How many stories are in TFDNE?

NZE: There are twenty stories in all. I must state here that I did not set out one morning to write a collection of stories. No. After attending the Chimamanda creative writing workshop in 2007, I began to write more stories which I began to send out to various publications. Until sometime in 2010 when my publisher demanded to look at some of my stories. There were close to thirty of them but we arrived at the twenty in the collection. So you will notice that the stories are diverse, exploring various styles and themes but all of them aim at giving light to the mundane…telling everyday Nigerian stories that I feel strongly about.

GL: Which is the most heart tugging tale? And why do you feel so?

NZE: Arrrghhhh, (scratches head) now that is a hard one. It’s like telling a mother to pick a favourite from a set of twins. Really, each of those stories means something special to me and are all products of a particular conception. They are my babies. So I wouldn’t pick one as a favourite without living with the guilt of having ignored the other. In many ways they are all heart tugging and i will rather leave the readers to pick which they connected with most.

GL: What and who inspires your writing?

NZE: More of what than who really. I am inspired by everything that happens around me from the scramble at rowdy bus parks, to the headlines in the newspapers and even game shows on the television. There are so many stories to tell around us and no one else will tell these stories but us. Someone once said we are often nauseated by the screams of the bus conductors that we fail to notice the poetry in it…the rhyme, the repetitions etc. All these inspire me.

GL: Your book will be launched in Lagos, at Kongi’s Harvest Gallery. Freedom Park, Broad Street, Lagos. What plans do you and your team (Dada) have for other parts of the country?

NZE: Certainly after the launch in Lagos, other activities are lined up for other parts of the country including readings, guest appearances, book signings etc. You will be informed as they unfold. Of course I am available for groups and clubs that wish to invite me to their location.

GL: Dada authors are known for touring internationally. Any plans of such for TFDNE?

NZE: Like you rightly noted, that is a DADA Books tradition and it continues. Indeed discussions with my publisher indicates that we will be taking it a notch higher. Let me not let the cat out of the bag at this point. Just watch out.

GL: How does it feel to be under the same publisher with the novelist and controversial personality, Onyeka Nwelue, and the poet Jumoke?

NZE: (Laughs) Onyeka will have your arm for that comment (Laughs again) Let’s just say I feel honoured to share the same publisher with these two and also with the young Ruby Igwe who has a fantastic children’s book published also by DADA books. We are like a family you know. I look forward to making great accomplishments together.

GL: What does it mean to you to be an author/writer? Which authors do you admire the most?

NZE: I have been published in the past. Spectrum Books published my novella, Whispering Aloud a couple of years ago so I am sort of used to that feeling. It is a feeling of fulfilment I must say. As for writers I admire most, hmmmm the space here wouldn’t take it ‘cos I love good writing and I have read quite a lot.

GL: With the recent revolution in the publishing industry in Nigeria, what good news do you reckon it brings?

NZE: Honestly I have not noticed any revolution. Revolution is a very strong word you know. At best what I can say really is that from almost nothing, we now have a number of new publishing houses in the country publishing creative works as against educational books. That is some progress not a revolution as yet. The direct implication of this progress is that many more talents from Nigeria, I mean those of us resident within the country, now have a greater opportunity to have their work in print. An increase in the number of good books published locally I believe will act in a positive feedback mechanism to improve reading culture in the country.

GL: What would you want your readers to expect from TFDNE?

NZE: Hmmmm, Complete enjoyment! I expect the reader to laugh, be moved to tears and be boiled by anger. I hope the anger or whatever other emotion readers get out of the book propels them to reach resolutions of making better life decisions or simply appreciating once more the beauty in the common humanness that we share.

NZE: On a final note, I wish to once again encourage all that can be there to attend the book launch. You know, I feel particularly privileged to be riding on DADA Books. I have a fantastic young publisher who is not just passionate about books but also about growing young writers. There is also Blues & Hills Consultancy who represent me. I can assure you there is a lot being planned for the day. I believe you have already seen the nollywood style book trailer. That’s just a tip of the iceberg. I must highlight here that there will be an e-book version of my book which will be available on a home grown digital book platform, Takada that will be unveiled at the event. So you don’t want to miss this.

The Funeral Did Not End, his second published book which has been long anticipated, is published by DADA books and is being presented to the public on Saturday the 15th of September from 5pm-7pm at the Kongi’s Harvest Gallery, Freedom Park, Hospital Road, Lagos Island.

The average diameter D of the muscle fibers is about A cm Cialis The vertical position of the insect thus oscillates up and down at the frequency of the wingbeat. https://newfasttadalafil.com/ - Cialis